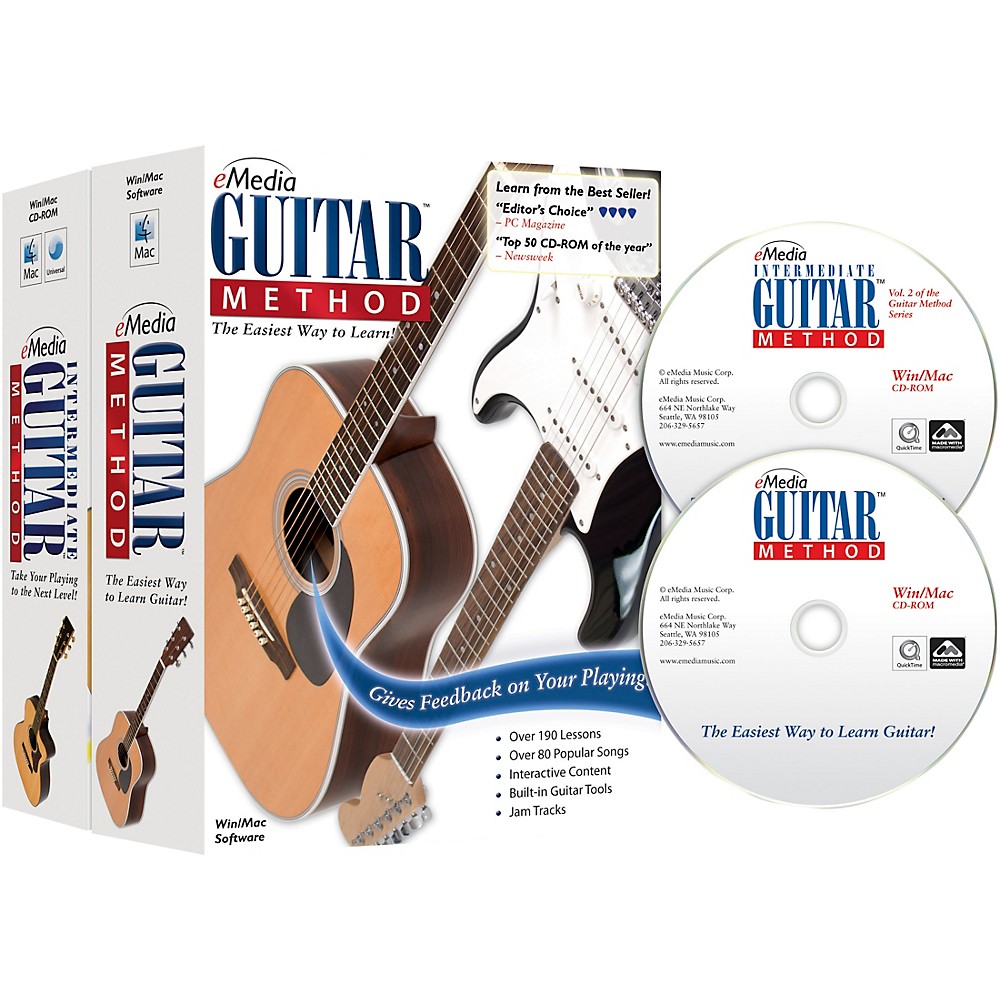 eMedia Guitar Method Deluxe Windows/Mac software includes everything you need to become a great guitar player, with over 360 audio- and video-enhanced lessons and over 130 great songs. The Animated Fretboard shows you the notes to play and eMedia Guitar Method's Interactive Feedback listens to you via the computer microphone to show if you are playing the correct notes in melodies, leads and riffs. Also included are an automatic tuner, metronome, audio recorder, 1000-chord dictionary, scale-directory, and more.<br><br>Songs include Knockin' on Heaven's Door as by Bob Dylan (acoustic) and Guns 'N Roses (rock), All Along the Watchtower made famous by Bob Dylan &amp; Jimi Hendrix, Little Red Rooster made famous by the Rolling Stones, Rock N' Me by Steve Miller Band, Downtown Train made famous by Rod Stewart, Uncle John's Band by the Grateful Dead, Scarborough Fair made famous by Simon &amp; Garfunkel, Ode to Joy by Ludwig van Beethoven, House of the Rising Sun made famous by the Animals, La Bamba made famous by Ritchie Valens and Los Lobos, Midnight Special made famous by Creedence Clearwater Revival, Spoonful made famous by Eric Clapton, Willie Dixon, and The Rolling Stones, Jet Airliner by The Steve Miller Band, Drive On by Johnny Cash, Time in a Bottle by Jim Croce, Fr Elise by Ludwig van Beethoven, Malaguea by Ernesto Lecuona, Touch of Grey by the Grateful Dead, Im Your Captain/Closer to Home by Grand Funk Railroad, Too Much to Lose made famous by Jeff Beck, and many more!<br><ul><li>Expanded Interactive Feedback now provides feedback on both chords you strum and melodies you play</li><li>Performance Evaluation gives your song playing a score so you can gauge your progress as you improve</li><li>Ear Training lesson chapter helps you learn to play by ear</li><li>Play along with live-recorded band Jam Tracks all throughout the course</li><li>Updated modern, easy-to-use, and cleaner-looking user interface</li><li>Over 360 guitar lessons by Kevin Garry, Ph.D., award-winning guitarist and Professor of Music</li><li>Animated Fretboard that makes it easy to see chord and note fingerings for lessons and songs</li><li>Note Tracker and Finger Tracker technology displays the notes youre playing</li><li>More than 80 videos, with split-screen views and close-ups of both hands</li></ul>

Tory Lanez has been branded genuinely crazy by Megan Thee Stallion, after he insisted hes still friends with her following allegations he shot Megan in the foot after a party in July....
>Read More

Beyonce has issued a passionate plea calling for the end of senseless brutality in Nigeria amid ongoing protests relating to the police unit known as the Special Anti-Robbery Squad (SARS)....
>Read More

The Beatles legend - who released his debut solo LP McCartney in 1970 and followed with McCartney II a decade later - is set to announce the next record on Thursday (22.10.20)....
>Read More