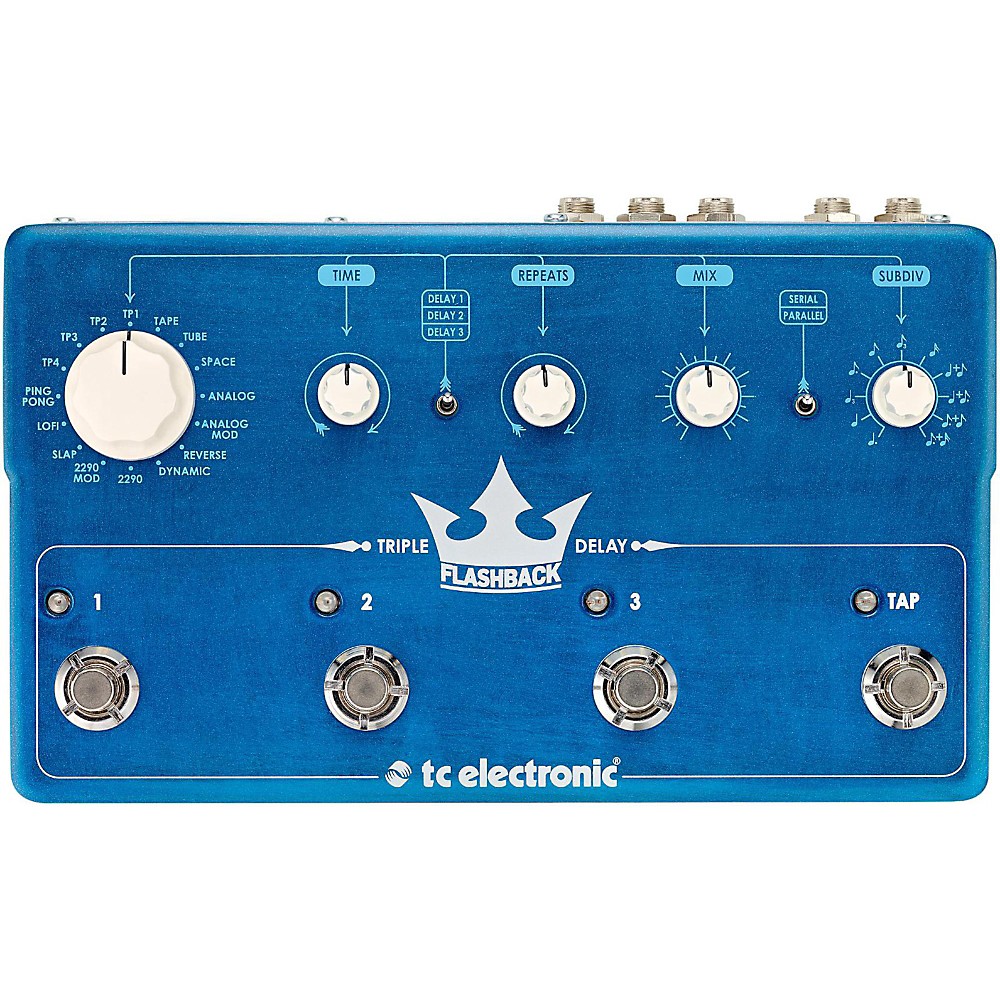 One of the most recurring things discussed in the TC Electronic community regarding their Flashback Delay pedals, is that they sound so good that they wish they could have several of the delay tones running at the same time. The Flashback Triple Delay is the result of TC Electronic's engineers making these dreams come true and it's ready to rock your delay-hungry socks off.<br><br><strong>The Sonic Multiverse</strong><br>Ever heard a tape echo run through a ping-pong delay and then into a reverse delay? No? Well it sounds amazing. With the Flashback Triple Delay you can go as crazy as your imagination allows and with the added function of running the delays in series or in parallel, you can go from lush divine delays to otherworldly soundscapes in an instant. Time and space have never been easier to manipulate.<br><br><strong>Trippin' On Triplets</strong><br>As if having three high-quality delays running at the same time isn't enough, TC Electronics has also added a dedicated subdivision knob that lets you assign different rhythmic patterns to each delay. You'll get everything from dotted eighths to triplets and on to several types of dual delays. So whether you're going for a smooth rhythmic-roll or a full-on psychedelic-trip, Flashback Triple Delay is sure to deliver.<br><br><strong>TonePrints In Tandem</strong><br>Flashback Triple Delay is the only delay pedal that lets you run several custom-tuned delay sounds at once. Imagine running delay TonePrints from Steve Morse, Guthrie Govan and John Petrucci all at the same time; the result is spectacular. Add to that the option of creating your very own delay tones via TC's free TonePrint Editor and you've got yourself one of the most versatile delay pedals ever made.<br><ul><li>Up to 3 delays running at the same time</li><li>Seemingly endless subdivision options</li><li>TonePrint-Enabled</li><li>DC adapter included</li></ul>

A new version of the Toni Morrison-inspired track...
>Read More

The Chromatica song gets a dramatic visual...
>Read More

The Kentucky country artist calls for fans to support #BlackLivesMatter: Id venture to say if we were met with this type of daily attack on our own people, we would take action...
>Read More