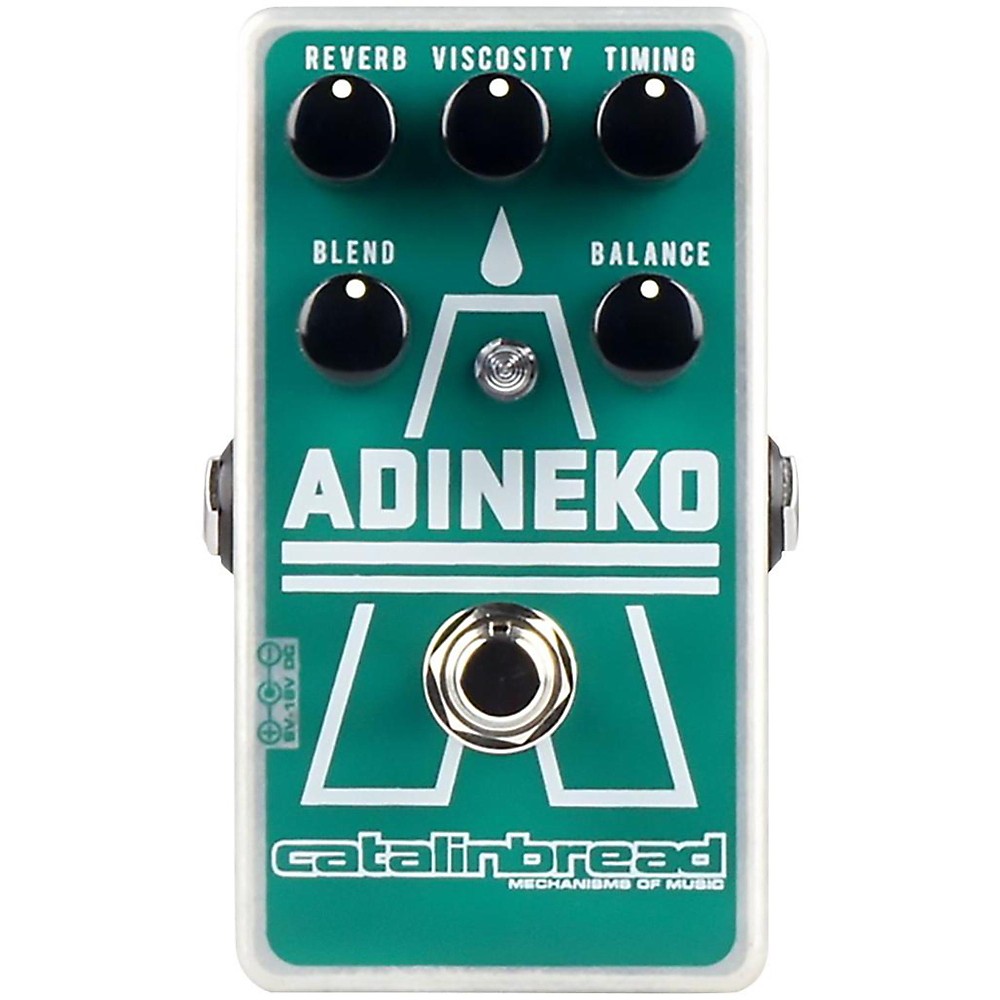 Catalinbread began working on an oil can delay (later to be named the Adineko) in the Summer of 2012, about the same time they were working on the Echorec. They identified a number of very cool behaviors of the old units, though the differences could be dramatic from unit to unit, or day to day (even hour to hour based on the temperature of the oil). The positive behaviors were a cool, bright, but murky sounding echo with a vibrato modulation that lined up with the echo time, and a repeat quality that had a fog that hovered in unique way.<br /><br>You will notice that each of the Adineko cases have been aged. It just seemed fitting for this, which is inspired by the old oil can effects, to look physically weathered and a bit stained.<br><br><div>As they always strive to do when making something old, new again, Catalinbread wants to honor the old experience and expand upon it. The Adineko is no exception: the murky warble of the old units, traditionally only achievable when the oils thickness is incorrect, can be conjured a twist of the VISCOSITY knob. The warm echo quality has an expanded range of delay time (TIMING knob), more so than any oil can unit could ever hope to achieve. The dual playback head is continuously balanceable (BALANCE knob) to favor one head over the other for interesting syncopation feels.<br><br>The Adineko can achieve authentic oil can sounds, but is designed to mode the mechanical concept and deliver results well beyond what was possible with the original units.<br><br>To dial an authentic oil can sound:<br>TIMING to 9-10 oclock <br>VISCOSITY to 9-10 oclock <br>REVERB to the verge of self oscillation <br>BLEND to 12 oclock <br>BALANCE to 12 oclock<br><br>Now you will hear all of the hallmarks of an original oil can unit. A relatively short echo time on two taps, a vibrato in the concert with the delay time, and a reverb that sounds like a low lying fog coalescing upon the verge of a self-oscillating resonant point. To get the vibrato<ul><li>Authentic oil can delay sounds</li><li>Timing, Viscosity, Reverb, Blend and Balance controls</li><li>Powered by 918V DC external power supply</li></ul>

Shared in a video snippet posted to his Twitter...
>Read More

The trios headlining show at Bonnaroo 2009 is streaming on YouTube for the weekend...
>Read More

Watch Aminé Perform in a Hot Air Balloon on Kimmel

The beloved playback singer recorded over 40,000 songs and has been sampled by M.I.A. and Madlib...
>Read More

His first new track since the release of The Goat in May...
>Read More