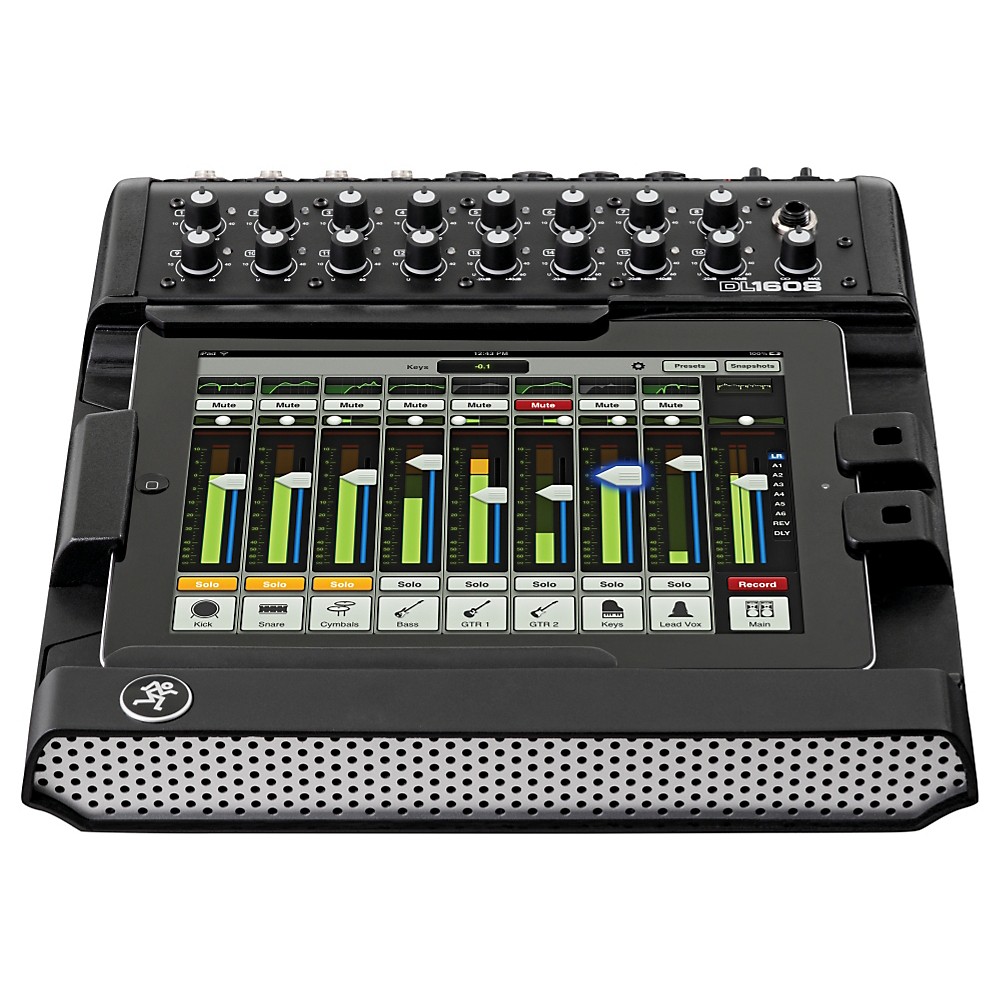 The DL1608L is a 16-channel mixer with revolutionary wireless iPad control that makes any live sound engineer's job and workflow much more enjoyable and exciting. This latest version of the series features a Lightning connector, replacing the 30-pin version. The Lightning connection is smaller and faster than 30-pin. The L delineation in the model name indicates the Lightning connector.<BR/><BR/>With 16 high-quality Onyx microphone preamps, 24-bit Cirrus Logic AD/DA converters, and powerful internal DSP processing, the DL1608L has plenty of unmatched hardware power to support the extremely intuitive user interface of the iPad. There is an iPad dock built-into the unit should you choose to use it in it's standard mixing form, or you can simply pop the iPad out of the dock to freely move about the venue to adjust your mix at will with the use of an additional Wi-Fi router. You'll have Full hands-on control of audio level, 4-band EQ, compression, gate, delay, reverb, and more for each of the DL1608's 16 channels and master fader. Perfect for a wide variety of smaller applications and venues, the DL806 is the most modern, powerful utility mixer available. Forget bulky consoles and racks of gear. The power is at your fingertips.<BR/><BR/>*Wi-Fi router required for wireless operation. Wi-Fi router and iPad, iPod touch or iPhone not included.<BR/>*Wireless control supported from all iPad models. Docked control supported from iPad, iPad 2 and iPad (3rd generation)<BR/>*Wireless control supported from iPod touch (4th and 5th generation), iPhone 4, iPhone 4S and iPhone 5<BR/>*iPad must be docked and the app must support background audio playback to integrate music<ul><li>Lightning connection</li><li>16 Onyx mic preamps</li><li>High-end Cirrus Logic converters</li><li>Ultra low-noise, high-headroom design</li><li>4 aux sends for monitor mixes</li><li>Master L/R output for mains</li><li>Choice of powerful, touch-sensitive plug-ins</li><li>4-band EQ, gate and compression on inputs</li><li>31-band GEQ and comp/limiter on outputs</li><li>Global reverb and delay</li><li>Seamless wired to wireless mixing</li><li>Tune the room from anywhere</li><li>Get on stage to ring out monitors</li><li>Personal monitor mixing with access control ability</li&