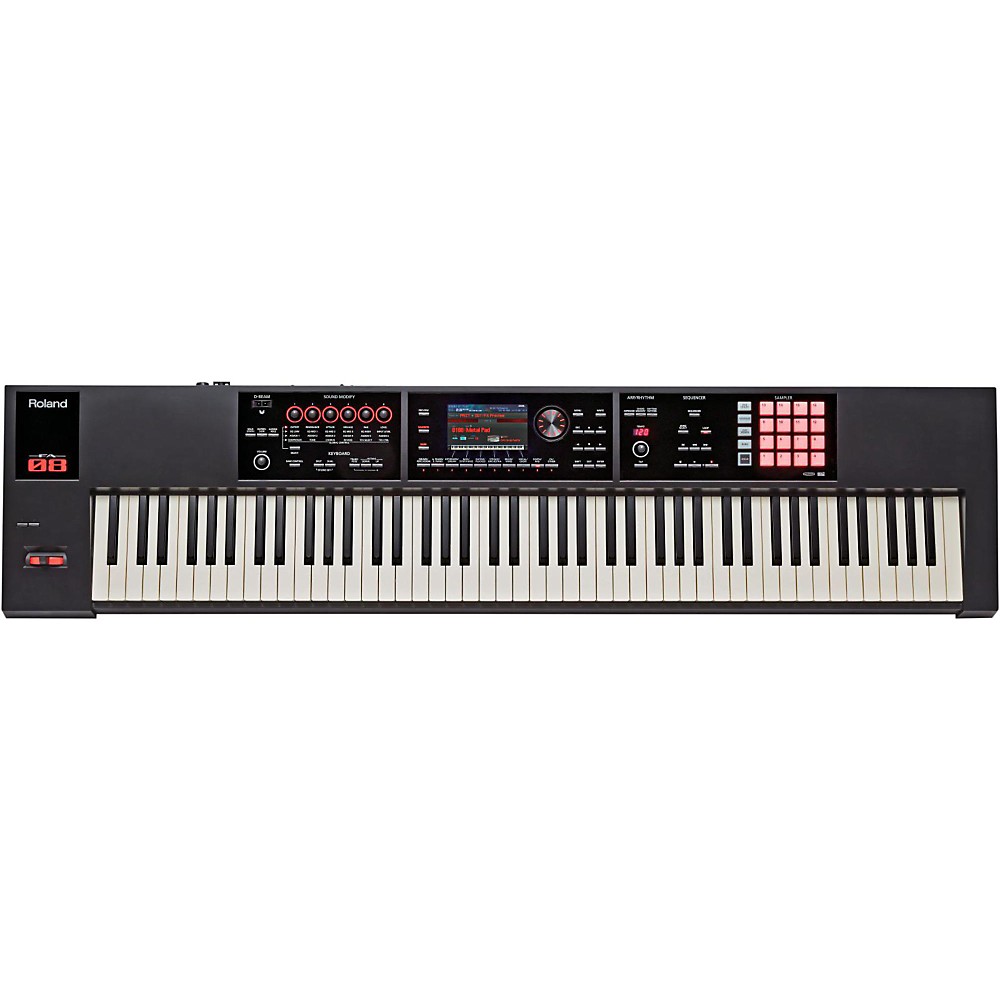 Roland's new FA series reimagines the music workstation, streamlining it for effortless realtime power, ultra-fast workflow, and maximum versatility. Ready to support any type of music you play, the FA-08 comes with a massive sound collection inherited from the flagship INTEGRA-7, dozens of studio-quality effects, and expressive realtime controls, plus onboard sampling with zero load time for instant audio playback from the 16 backlit pads.<BR/><BR/>The sequencer features simple operation and non-stop loop recording, letting you capture songs and ideas as they come and export them as multitrack data to use with your DAW. Flowing seamlessly into every part of your creative world, the FA series morphs instantly from standalone use to become the command center of your computer music studio, with USB audio/MIDI interfacing, powerful real-time controllers, DAW transport controls, and much more.<BR/><BR/><strong>No Work, All Play</strong><BR/>Music workstations play an important role for keyboardists in a wide range of creative activities, from live performance to song development to production in the studio. However, they can often be complicated and difficult to use to their full potential, bogging down the creative process and inhibiting the flow of ideas. In developing the FA series, Roland has completely reimagined the music workstation to provide musicians an inspiring platform that's extremely powerful and versatile, yet simple and intuitive at the same time. With a streamlined interface and focused, practical features that maximize your creative flow, the FA series allows you to experience newfound freedom to deeply explore and develop your musical ideas with less effort than ever before.<BR/><BR/>Perfor<strong>m and Record with a Massive Selection of Roland's Very Best Sounds</strong><BR/>The true measure of any music workstation lies with the quality and diversity of its sounds. Filled with over 2000 tones directly inherited from the INTEGRA-7, Roland's flagship<ul><li>Light, mobile body with 88-note Ivory Feel-G Keyboard</li><li>Over 2000 sounds from the flagship INTEGRA-7 sound module</li><li>16-track sequencer with non-stop loop recording</li><li>Export sequencer tracks to SDHC card or as multitrack audio or MIDI to your DAW</li><li>Onboard sampler based on the SP-404SX</li><li>16 indepen

On his latest project, the Brooklyn rapper realizes his vision. His forceful and focused bars are just one aspect of the highly skilled emcees community-focused and spiritually rewarding music....
>Read More

Following a 2019 episode of police harassment in front of his own building, the Detroit house legends latest goes hard on depth and funk, but theres often an ache where the fun used to be....
>Read More

The 26-year-old sounds reinvigorated on his latest--the flows are crisper, his puns are more colorful, and the beats are pristine....
>Read More

On her second album as Wares, Cassia Hardy sings of rage, joy, and transformation on a dynamic and euphoric rock record....
>Read More

New Yorks most anxious punk delivers hook after hook on an album that deals with evergreen sociopolitical concerns yet sounds like it couldve been written 30 minutes ago....
>Read More