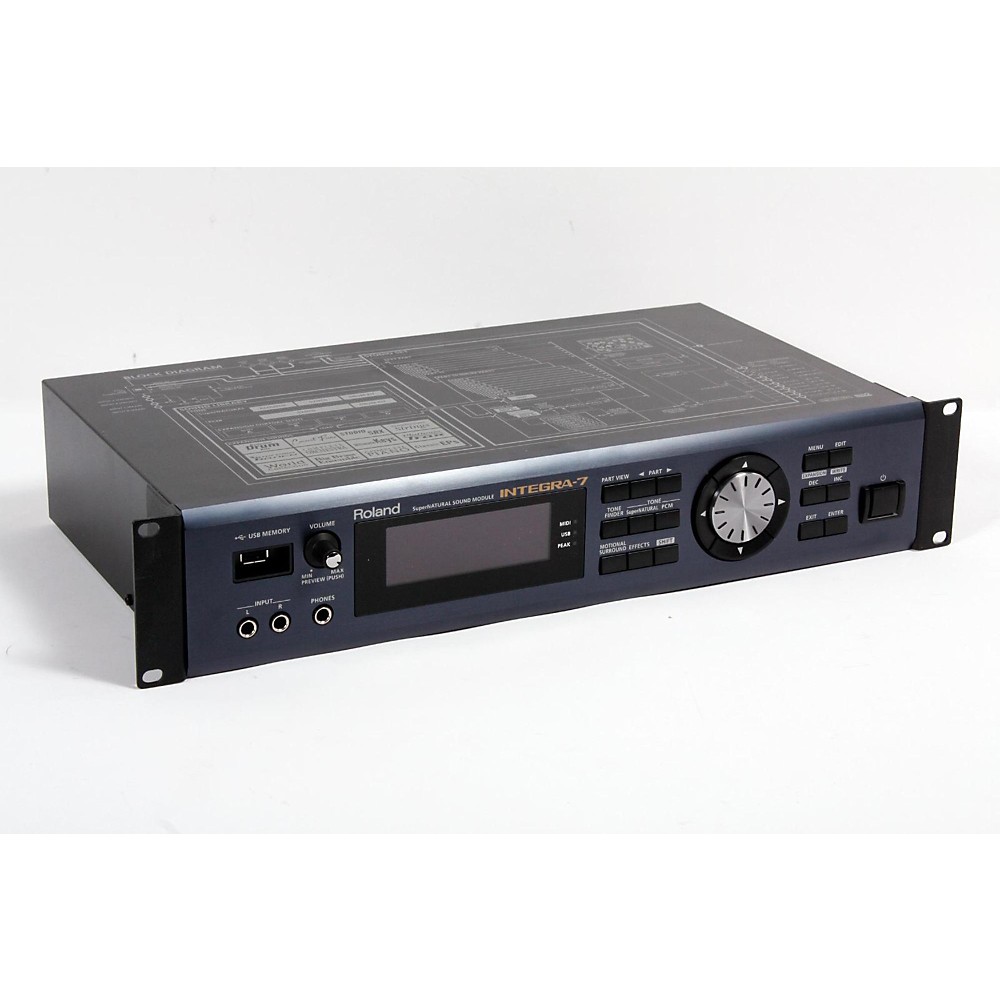 Roland's INTEGRA-7 gives musicians a goldmine of the latest SuperNATURAL sounds and Behavior Modeling technology in a fast-access, fully stocked 16-part module. The powerhouse rack comprises a greatest hits collection of sounds from Roland's flagship keyboards and V-Drums modules, plus a coveted lineup from the legacy SRX library. It also introduces a new technology called Motional Surround, a 17-part ambience engine that lets you graphically control the distance and position of each part within 360-degree sound field. With the immense power of the INTEGRA-7, you can create amazingly realistic and detailed orchestral arrangements, immersive, spatial sounds, and so much more.<br><br><strong>SuperNATURAL-Powered Music Production<br></strong>The core of the INTEGRA-7 is its SuperNATURAL sounds with Behavior Modeling technology. SuperNATURAL not only mirrors the sounds of acoustic instruments, it also simulate the behavior of instruments when they're played. With SuperNATURAL, sounds come to life under your fingers.<br><br>Whether used in acoustic or electronic domains, the INTEGRA-7 puts a world of expressive sound in your hands. Go deep inside the programming engine and customize your own sounds, or let the INTEGRA-7 do it all for you. With so many great sounds onboard, and with the INTEGRA-7's organic response to how you play your keyboard/controller, you'll experience a new level of realism and effortless expression.<br><br><strong>SuperNATURAL Synthesizer<br></strong>The INTEGRA-7's SuperNATURAL powers also reach beyond acoustic instruments. It's loaded with SuperNATURAL synth tones that meticulously recreate the fat sound of beloved vintage synthesizers, their expressive filters, and unique envelope behaviors. Hundreds of PCM waveforms are onboard as well, providing a treasure trove of classic digital-synth sounds prevalent in the '80s and '90s. You can even edit the sounds intuitively on an iPad with the dedicated editor app.<br><br><strong>SuperNATURAL Drums a<li>Flagship synth module with over 6,000 sounds built-in</li><li>The latest SuperNATURAL sounds with enhanced Behavior Modeling technology for expressive acoustic instruments and accurate reproduction of performance articulations</li><li>Powerful SuperNATURAL synth engine with fat analog synth models and vintage filter types</li>

The London drill rapper ventures beyond his chosen style in order to offer a fuller picture of what hes gone through. At his best, he runs laps around the albums skeletal beats....
>Read More

The War on Drugs: LIVE DRUGS