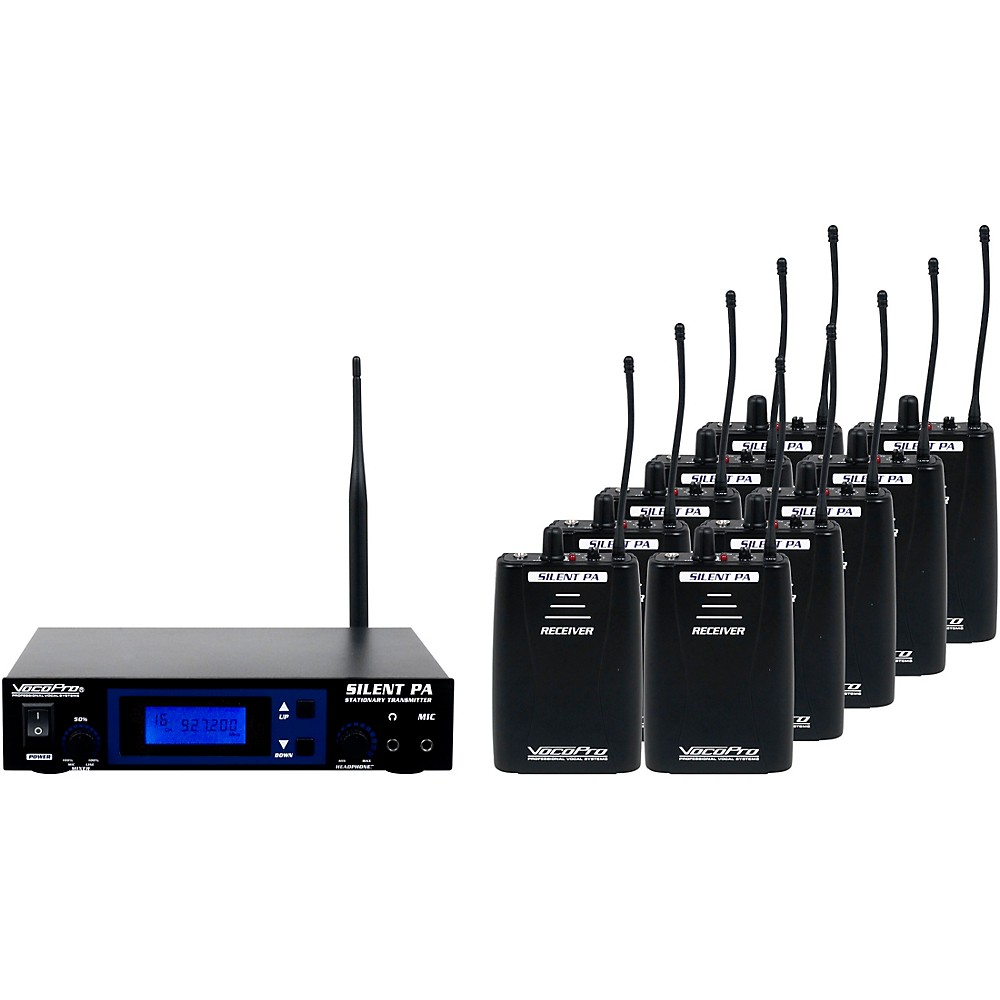 The SilentPA is the first of its kind with 16 easily adjustable channels. It allows up to 16 transmitters to broadcast, each on a unique frequency, to an unlimited number of receivers; the listeners can then tune into the program they wish to listen to. This could be different bands performing simultaneously in the same hall, a House Of Worship broadcasting their sermon in different languages or a backyard concert in a crowded neighborhood. The SilentPA has an untold number of applications.<br><br>There are two types of transmitters available for the SilentPA. The Stationary Transmitter allows both a microphone and a balance line input signal with a Mix Level control. Or use the portable solution, the Bodypack Transmitter equipped with a microphone and 1/8 stereo inputs; so it's good for both music and voice transmission. The bodypack receiver includes two (2x) 1/8 Stereo Outputs, so it's easy to monitor the program AND record the performance on a separate recording device. Never be stuck with dead batteries thanks to the internal recharging circuit, able to simultaneously use and charge rechargeable batteries (not included) installed into the Bodypack Transmitter and Receiver; just connect a USB cable (not included) from a power adapter or power bank ( not included) and into the +5V USB IN available on both the Bodypack Transmitter and Receiver.<ul><li>Includes silent-pa-tx and one silent-pa-rx (does not include headphones)</li><li>Operates in 900mhz band, free of tv station interference</li><li>Utilizes uhf technology for greater reliability and operating range than vhf or 2.4ghz</li><li>Bodypack receiver has two dedicated audio outputs</li><li>Stationary transmitter equipped with mixing function to combine microphone and music signals</li><li>Lavaliere microphone included with bodypack transmitter</li><li>Bodypack transmitter/receiver powered by two (2x) aa, alkaline or rechargeable, batteries</li><li>Internal recharge circuit allows simultaneous operation and charging of rechargeable Batteries on both bodypack transmitter and receiver&nbsp;</li><li>5v USB charging input enables continuous use when used with rechargeable batteries and power bank</li><li>Panel connections: mini XLR mic jack, 1/8&quot; headphone output x2 (headphones not included) power input for recharging rechargeable batteries (not includ