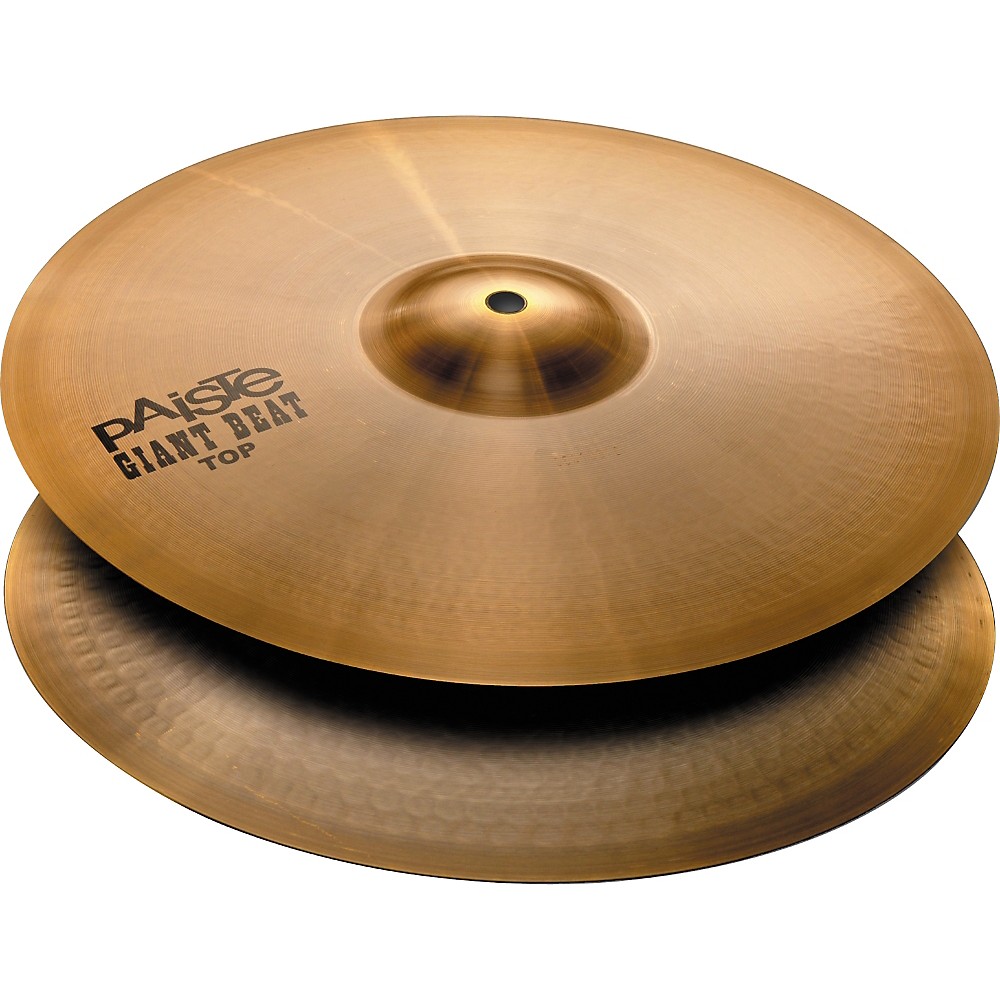 The Paiste Giant Beat Hi-Hats deliver a mellow, warm, yet brilliant sound with a hissing shimmer. They have a medium range and fairly clean mix. Other sound characteristics are light, woody, and open, paired with a well defined, soft chick-sound.<BR/><BR/><BR/><BR/>Re-Introduction: 2005<BR/><BR/>Original Introduction: 1967<BR/><BR/>Background: Paiste develops the Formula 602 in the late 1950's from the traditional 20% Bronze, a cymbal line rooted in Jazz and acoustic Rock 'n' roll that exhibits a cool, rich, sophisticated sound character and gains us the first wave of international notoriety - Yet the company does not rest, experiments with CuSn8 bronze alloy, and pioneers CuSn8 cymbals in 1963 - Around the same time, the world is experiencing the rapid expansion of Rock music, which emerges forcefully from the foundations of Blues, Folk, Country and Rock 'n' Roll as bands like the Rolling Stones, Yardbirds, Animals, Beatles, Kinks and the Who take the stage - The electrified sound they generate is groundbreaking - Popular music, simply stated, becomes loud and irreverent - The bronze alloy Paiste is already working which turns out to be perfect for the new soundscape with its amplified volume and frequencies - In 1967 Paiste launches Giant Beat cymbals, which are characterized by warmth, strength and brilliance such as drummers had not known before<BR/><BR/>Innovation: The Paiste Giant Beat is the first cymbal series to be manufactured from the coveted CuSn8 Bronze, 2002 Bronze<BR/><BR/>Alloy: CuSn8 Bronze, also known as 2002 Bronze<BR/><BR/>Quality: Professional<BR/><BR/>Cymbal Production: Manual Craftsmanship - Hand Hammering, Hand Lathing<BR/><BR/>Applications: Soft to loud settings - Live and Recording - Country, R&B, Rock, Jazz-Rock<BR/><BR/>Users: Working Musicians, Enthusiasts - Drummers eager to re-capture Paiste vintage cymbal sounds from the late 60's<BR/><BR/>Sound: Bright, warm, with a complex array of full and dark presence<BR/><BR/>Looks: Dark, ea<ul><li>Weight: medium thin top / medium heavy bottom</li><li>Volume: soft to medium loud</li><li>Stick Sound: defined</li><li>Intensity: medium lively</li><li>Sustain: medium</li><li>Chick Sound: soft, tight</li></ul>

Here are some other products related to Paiste Giant Beat Hi-Hats 15 in.

It was my firstborn, Mitchell says. I didnt know whether it was a good song or a bad song. It was just the first one that came out...
>Read More

Shes played the Opry more than any other non-member, but the invitation to join has yet to arrive...
>Read More

Gallery will celebrate the late legend with virtual and in-store exhibit, by appointment only...
>Read More

Phish frontmans shows at the Beacon Theatre in New York will stream for free on Twitch...
>Read More